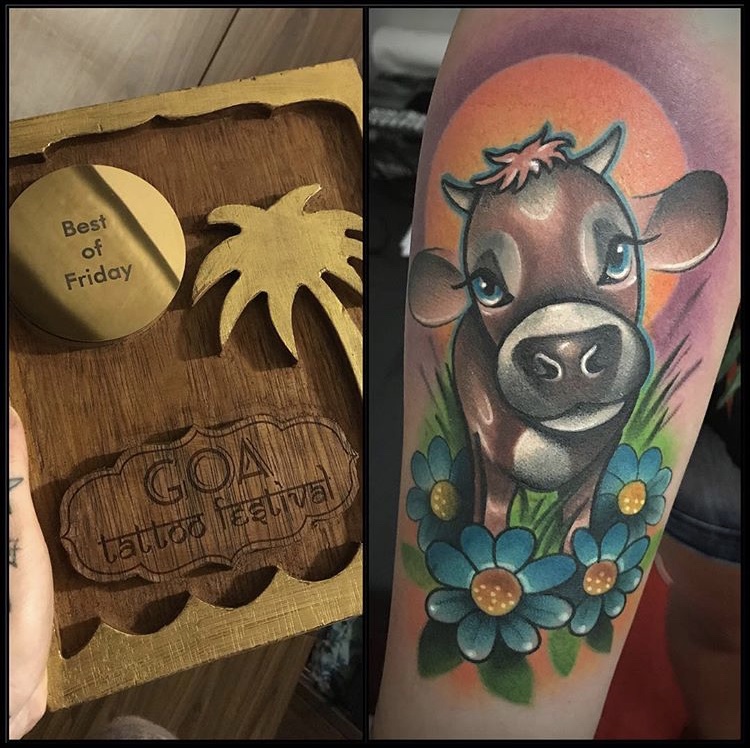 In early January this year I had an opportunity to attend the 4th International Tattoo Festival in Goa, India with Rob. I had been to a few tattoo conventions in the past but nothing really prepared me for Goa.

To say it is a magically place is an understatement and I fell completely in love with everything about it. The team who organise the event really focused on bringing the artists and those planning on attending the show together and introducing them to all the charms that Goa has to offer including night time markets, hidden beach bars and motorbike day trips.

This created a really wonderful atmosphere with friendships being formed and creative ideas being shared. Goa itself is an incredible place, with a super laid back attitude and great people.

As a vegan and dog trainer I was also in my element surrounded by the magical Goan cows free roaming the streets. They were everywhere and to my delight treated with real respect by the people around them.

I was so in love with the cows that when I asked Rob to tattoo me at the convention I couldn’t think of a more fitting image to put on my arm then a little brown cow.

As an artist who works a lot with brightly coloured pieces Rob represented a different style of tattoo then what is currently widely practiced in India. However, there was never a moment that the table was not surrounded, while he worked on my arm, as the spectators and artists alike were really excited to see it come together.

Once finished my little brown Goan cow was entered into Best of Day and I was absolutely thrilled when it won. I would say that my trip to Goa and the International Tattoo Festival was definitely one of the best holidays I have ever had. If you want a tattoo festival that literally has it all, book yourself a ticket to Goa, I know I for one will absolutely be back.

back to all news
CONTACT LTS
We use cookies on our website to give you the most relevant experience by remembering your preferences and repeat visits. By clicking “Accept”, you consent to the use of ALL the cookies.
Cookie settingsACCEPT
Manage consent

This website uses cookies to improve your experience while you navigate through the website. Out of these, the cookies that are categorized as necessary are stored on your browser as they are essential for the working of basic functionalities of the website. We also use third-party cookies that help us analyze and understand how you use this website. These cookies will be stored in your browser only with your consent. You also have the option to opt-out of these cookies. But opting out of some of these cookies may affect your browsing experience.
Necessary Always Enabled
Necessary cookies are absolutely essential for the website to function properly. These cookies ensure basic functionalities and security features of the website, anonymously.
Functional
Functional cookies help to perform certain functionalities like sharing the content of the website on social media platforms, collect feedbacks, and other third-party features.
Performance
Performance cookies are used to understand and analyze the key performance indexes of the website which helps in delivering a better user experience for the visitors.
Analytics
Analytical cookies are used to understand how visitors interact with the website. These cookies help provide information on metrics the number of visitors, bounce rate, traffic source, etc.
Advertisement
Advertisement cookies are used to provide visitors with relevant ads and marketing campaigns. These cookies track visitors across websites and collect information to provide customized ads.
Others
Other uncategorized cookies are those that are being analyzed and have not been classified into a category as yet.
SAVE & ACCEPT